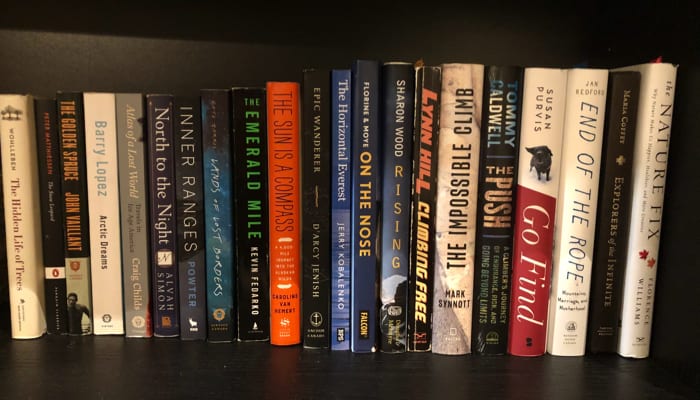 I first envisioned bringing mountain sports and culture storytellers to Nelson in 2017, when I began attending the Banff Mountain Film and Book Fest. Each year at the festival, I’d meet notable adventure writers who were keen to promote their books in other mountain towns. I quickly realized that the mountains are not only among the most awe-inspiring landscapes on earth, but also the most creative. Add with the magical synergy of mountains and water, like we have in Nelson, what storyteller wouldn’t want to spend time here? If only we had someone to coordinate adventure storytelling events here in town.

In 2018, when I began reviewing new books in the adventure and exploration genre for Outside magazine, my wistfulness intensified. I fantasized about writers like Kate Harris—who wrote the award-winning, soul-quenching Lands of Lost Borders (Penguin Random House, 2018)—including Nelson on their book tours. Why not? Nelson is an ideal stop-over between Vancouver and Calgary. We have one of the greatest ski resorts in North America; a vibrant arts community; a local, independent book store; and a world-class mountain sports and culture magazine. We even have our own writing festival.

Later that year, I felt encouraged when I volunteered to help organize a speaking gig in Nelson for Squamish resident and climber Jan Redford to present her debut memoir End of the Rope: Mountains, Marriage, and Motherhood, as part of an event put on by TAWKROC, the Association of West Kootenay Rock Climbers. I was delighted at the turn out. Nelson residents packed the Civic Theatre for Jan’s talk. I realized I wasn’t the only one hungry for adventure tales. I began to think, maybe I could be the person to bring these types of talks to the community.

The Nelson Adventure Speaker Series (NASS) was officially born on October 31, 2019 at the Banff Mountain Film and Book Fest, when I shared the idea with Sharon Wood, who, in 1986, became the first woman from North American to summit Everest. She was the keynote speaker that evening in Banff, discussing her debut memoir Rising: Becoming the First Canadian Woman to Summit Everest (Douglas and McIntyre, 2019). In addition to her career as a mountain guide, Sharon is also a professional motivational speaker. She agreed that writers in our genre would be delighted to visit Nelson. In fact, she promised that if I started NASS, she’d be my first speaker. It was an offer I couldn’t refuse. We set a date of February 20, 2020, to coincide with a winter hut trip she’d planned in the area.

Which brings us to today, and the launch of the NASS website. I have big plans for my little idea to bring mountain sports and culture storytellers to speak in Nelson. I hope you’ll join me at the Prestige Lakeside Hotel on Thursday, February 20, 2020 at 7:00 pm, to welcome Sharon Wood.